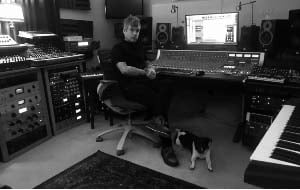 Graduating from the online Master of Music with an Emphasis in Music Technology – Studio Technology Emphasis program at Southern Utah University would easily be the highlight of any other year for Chris Vrenna.

But being inducted into the Rock and Roll Hall of Fame is pretty tough to top. Vrenna, the original drummer for industrial rock giants Nine Inch Nails, was enshrined with his bandmates as members of the prestigious Class of 2020.

He heads the music technology program at Calhoun Community College in Tanner, Alabama and enrolled in SUU’s master’s degree program to add to his versatility and knowledge base as an educator.

“There are a few classes [at Calhoun Community College] I want to teach, and I also want to teach classes that will go toward a four-year degree,” he said. “To do that, you have to have a master’s degree. I looked up a few schools and liked SUU’s program.

Reading the course descriptions online convinced Vrenna that SUU’s program was the right one for him.

“It was exactly like what I teach and what I do. It fit. It was also 100% online, which I needed. The cost was very affordable — especially on a teacher’s salary. The program had everything that I was looking for, and I could also get it done in a year.”

The online format has helped Vrenna plan schoolwork around teaching music during a pandemic, which includes arriving early and staying late to take safety precautions for the students. He also teaches courses online that don’t require students to be in a studio for hands-on learning.

“It has made earning a degree manageable,” he said. “The experience of doing an online program with SUU made my transition to teaching classes online super smooth.”

One Way to Get There

Vrenna grew up in Erie, Pennsylvania, where he was a member of the Erie Thunderbirds Drum and Bugle Corps and met Nine Inch Nails founder and front man Trent Reznor.

The duo played in a band together in Cleveland that fizzled out, but they stayed friends and continued working together on what would become Pretty Hate Machine, the Nine Inch Nails debut album that rocketed the band to superstardom.

“I started college at Kent State University in 1986 and went there for more than three years,” he said. “We did our first Nine Inch Nails shows opening for Skinny Puppy in 1988. I took a few weeks off from school to tour.

“I never finished the degree, although I only needed 18 more credit hours. My band was blowing up — we were on 120 Minutes on MTV. For 30 years, I didn’t know that not finishing my degree was a big deal.

That’s easy to understand considering Vrenna went from playing in Nine Inch Nails to joining other successful bands and touring with the likes of Marilyn Manson, Stabbing Westward, and Gnarls Barkley. He also formed his own project, Tweaker, which released three studio albums.

Vrenna won a Grammy with Nine Inch Nails for the band’s live performance of “Happiness in Slavery” at Woodstock ’94. He has also worked with other big-name acts like U2, David Bowie, Guns N’ Roses, the Smashing Pumpkins, and Weezer as a producer, remixer and/or studio engineer.

“Then, I fell into teaching,” he said. “The first school I went to was a private, for-profit school in Madison, Wisconsin. [Getting hired] was more about your work credentials than your education credentials.”

When Vrenna realized he would need a college degree to move on from that position, he returned to Kent State and completed the bachelor’s in telecommunications online in 2017. That allowed him to enroll at SUU three years later.

“I love being back in school,” he said. “The instructors at SUU are all great and personable. Even though it’s online, you get the attention you need. The courses are great. They cover everything that you would want to learn in a music technology program.”

That’s What I Get

Although Vrenna has an accomplished music career, he is still learning plenty of valuable information in SUU’s online Master of Music with an Emphasis in Music Technology. He credits the program with uncovering new ways of thinking on top of validating knowledge and skills he already had.

“I have really enjoyed it,” he said. You can customize it to your own lifestyle.”

MUSC 6343: Electronic Sequencing/Score for Picture is one of Vrenna’s favorite courses in the curriculum, so far.

“I want to continue to score,” he said. “I am mostly known for video games. The last one I did was Quake Champions in 2016. I did one of the Call of Duty zombie games. Scoring is where my passion lies because I am a television and film junkie.”

Meanwhile, MUSC 6933: Popular Music History/Theory is the hardest course that Vrenna has taken in the program.

“I am classically trained in drums but not in piano,” he said. “It was a challenging class, but it taught me a lot more about music theory than I thought I could ever learn.

“Now that I am doing my capstone, I think to myself, ‘I can do better chords now or work this bass inversion.’ Because I was pretty much self-taught by what I picked up over 30 years, that class was the most difficult but also the one I probably needed the most. My capstone project is going to be a new EP.”

Vrenna especially benefited from MUSC 6353: Music Technology and Business with course projects focused on creating more of an online presence.

“I hate social media, but you have to do it,” he said. “I had to get Instagram.

“I bought the URL ChrisVrenna.rocks from GoDaddy and built a website. It has my bio, discography and a contact form. It took a master’s class to get me off my butt to do something I should have done years ago. I am super grateful that was one of the assignments.”

We’re in This Together

Even while teaching full time and earning a master’s degree, Vrenna is making music whenever possible.

“I always want to do music on the side,” he said. “I will do it whenever I can find time to squeeze it in, if it’s something cool to work on and is challenging.

“I do that to remain relevant in the industry itself and feed my own creative energy. Plus, I want my students to see that they are being taught by somebody who has not just done a lot of really cool stuff in the past, but continues to do cool stuff.”

Vrenna mixed an album for a French rock band this year and is waiting for tracks to engineer another one. In 2019, he worked with Pittsburgh rock band Code Orange.

His practical knowledge comes in handy for online master’s projects that pair him up with students from around the world.

“I have made a lot of friends,” he said. “I had a collaborative project with someone in South Korea. One of the other students is an American teaching English in northern Italy. There’s even someone from Auburn, Alabama, right down the road from me.”

“There wasn’t a music technology program when I was that age,” said 53-year-old Vrenna who learned to engineer on the fly while recording Pretty Hate Machine in the wee hours of the morning with Reznor. “It’s cool how it’s becoming more of a career with real colleges doing it. It’s still very specialized. SUU is ahead of the curve.”

With a few course requirements left to finish, Vrenna remains on track to graduate from SUU in December.

“I wanted to hit it hard and get it done,” he said. “I am sitting in front of my table of contents for my thesis paper as we speak. I have to start rough-drafting it out. It’s been a fun experience.

“The Rock and Roll Hall of Fame is a great honor. I got that and (will get) a master’s degree in 2020. All things considered, I am not having a horrible year.”

Explore the History of Electronic Music With a Master of Music in Studio Technology Emphasis
The history of electronic music is fascinating, from the advent of electronic instruments and recording equipment to the birth of synthesizers and digital music technologies.…
Read more
What Is a Master of Music in Studio Technology?
Musicians, composers, producers and publishers have long seen placing music in film and TV as the metaphorical “gold mine” of building long-term residual income. But…
Read more
Oklahoman Dustin Ragland Changes Career Direction After Earning Master's Degree
Dustin Ragland was a college music teacher in Oklahoma when he enrolled in the online Master of Music in Music Technology (MMT) – Studio Technology…
Read more
Have a question or concern about this article? Please contact us.